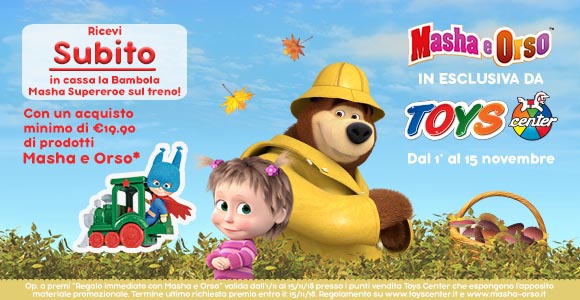 Maurizio Distefano Licensing (MDL), which manages licensing for the Masha and the Bear brand in Italy, has announced a major new partnership between the nationwide Italian toy chain Toys Center and the enormously popular children’s characters Masha and the Bear for a massive November promotion.

From 1 to 15 November 2018, in any Toys Center containing the relevant promotional material, customers who spend a minimum of €19.90 on Masha and the Bear products will be able to claim from the cash desk an amazing Masha doll – Masha the Superhero, in full superhero costume, driving her very own train!

This great offer applies exclusively to participating Toys Center shops and Masha and the Bear toys sold in those shops.

Launched in the 1990s, Toys Center has in the past fifteen years become the leading toy retailer in Italy, with over 120 stores in total, covering the length and breadth of Italy. One in every three toys sold in Italy is sold in a Toys Center store.

This two-week promotion builds on high consumer awareness of Masha and the Bear, and its success, both as a licensed brand and a TV series, with Italian families. Now in its third season, repeat showings and new episodes of Masha and the Bear are greeted with enormous enthusiasm by big audiences on both DeA Junior and Rai YoYo.

So popular is the brand that two spin-off series – Masha’s Tales and Masha’s Spooky Stories – have been created. Episodes of these three shows are also available to mobiles, PCs and tablets, and streaming on Infinity, a dedicated YouTube channel and the official Masha and the Bear Facebook page.

Maurizio Distefano, President, MDL, said: “This promotion in an enormous number of toy stores, proves, yet again, the staggering popularity of the Masha and the Bear in the pre-school market – and especially in Italy. We’re delighted to be working with the leading name in Italian retail to bring this wonderful offer to Masha and the Bear fans.”